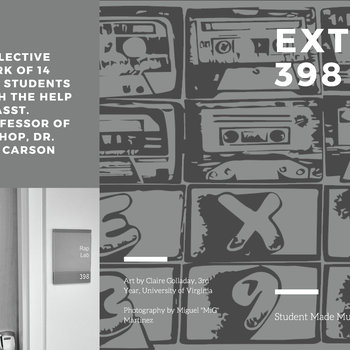 2. All other track available on BandCamp

Ext. 398 releases their first (and probably only) studio album with this self-titled project. The group of 14 explores what a hip-hop project can sound like in a university setting. Whether on flashy pop/trap sounds like “Jackie Chan” and “B.O.M.B” to brutally honest messages like “Atticus” and “Commonwealth State” the group balances easygoing fun with an honest awareness of their location in Charlottesville, Virginia. Led by hip-hop professor, Dr. A.D. Carson, this album forces the listener to step outside their assumptions about UVa, hip-hop, and, of course, what it means to be back on your Bullsh*t. Instead this “Breakfast Club” group of rap students and producers share their real lives with the listener … and equally importantly, try to get an A for the class.

All other track available on BandCamp

All track available on BandCamp - https://aydeethegreat.bandcamp.com/album/ext-398

&nbspBoth in class and on stage, it was easy to see the rapport that the students have developed with each other and with Carson. In the class before the final show, one student told his classmates about his performance with UVA’s Klezmer Ensemble last week – his first live vocal performance. Another introduced Carson to her friend, a high school senior who has been accepted at UVA and wants to double-major in music and biochemistry.