The Rap Lab at UVA is a collaborative hip-hop cypher space (for composing, recording, and editing) and classroom in the University of Virginia’s Department of Music, located in New Cabell Hall 398.

Students are encouraged to bring their experiences, their questions, their thoughts, into the Rap Lab. Some may want to carry on a fight against sleepwalking, others may want to combat a certain acoustical deadness, many may want to do both (or neither). Whether they aim to be called “thinker-tinker” is of less consequence than they are engaging, in theory and concept, with other students toward their common goals. “Writing Rap” students focus on the craft of composing and interpreting different kinds of raps. “Composing Mixtapes” students are tasked with collaborating, as a group, on an album*-length narrative-driven musical project. Students studying “The ‘Black’ Voice” deal more directly with the sonic implications of Ralph Ellison’s (Invisible Man, 1952) concept of invisibility, described by his narrator as such: “it is as though I have been surrounded by mirrors of hard, distorting glass. When [people] approach me they see only my surroundings, themselves, or figments of their imagination—indeed, everything and anything except me.”

“Nothing, storm or flood, must get in the way of our need for light and ever more and brighter light. The truth is the light and light is the truth. … [W]hen you have lived invisible as long as I have you develop a certain ingenuity.”

Ellison’s “invisible” narrator describes his hideout “in a building rented strictly to whites, in a section of the basement that was shut off and forgotten during the nineteenth century, which I discovered when I was trying to escape in the night…” as a “hole” that “is warm and full of light.” From this place he has decided to “carry on a fight against”  people he describes as sleepwalkers “without their realizing it.” He states, “I remember that I am invisible and walk softly so as not to awaken the sleeping ones. Sometimes it is best not to awaken them; there are few things in the world as dangerous as sleepwalkers.” From this secret place he dreams of inventing gadgets, “in the great American tradition of tinkers.” He says, “Call me, since I have a theory and a concept, a “thinker-tinker.””

His space has one radio-phonograph, but he plans to have five, to combat “a certain acoustical deadness in my hole, and when I have music I want to feel its vibration, not only with my ear but with my whole body.”

The Rap Lab currently has no radio-phonograph, but several workstations, hardware, and software, for students to work. If they so desired they have all they need “to hear five recordings of Louis Armstrong playing and singing “What Did I Do to Be so Black and Blue”—all at the same time.” They more often opt to make their own music. 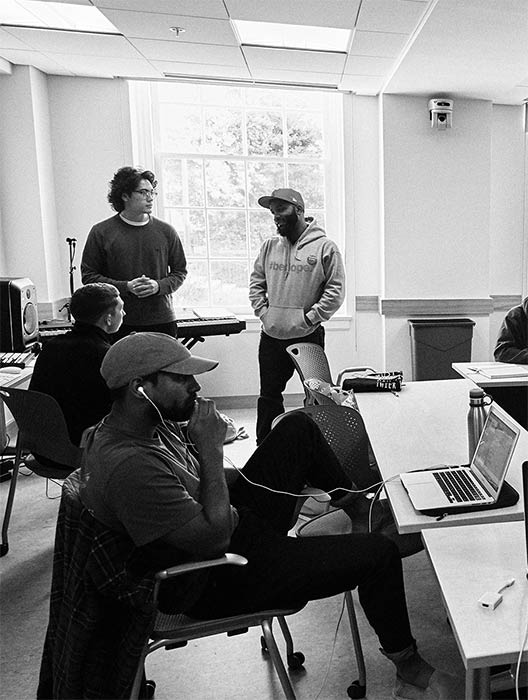